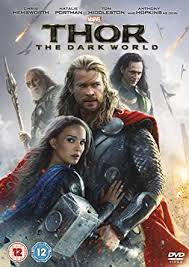 It is officially Week 8 of the Marvel-A-Week challenge. I confess, that I have skipped Iron Man 3 as I refused to buy it on Amazon Prime and for reasons, mostly, I suspect cynical, Amazon Prime have removed the rental option for quite a few of the Marvel films.
Thankfully Thor: The Dark World is a Netflix freebie and while my purse cries out with joy there is a very good reason for this.  The film sucks.

PLOT:  Set just after The Avengers, the Bi-Frost has been fixed and Thor (Chris Hemsworth) has brought peace to the nine realms, which apparently went to war with one another off screen.  Asgard’s tyrannical rule has been restored just in time for the Convergence, a 5,000 year cycle in which all the planets align and borders become blurred.  Coincidentally, Jane Foster (Natalie Portman) stumbles upon the long lost aether, which the Dark Elves, lead by Christopher Eccleston, now want back.  END PLOT

The plot for The Dark World isn’t ground breaking but it is harsh to say that it’s terrible.  The biggest problem I have with the film is the distribution of screen time.

Apparently, the screen writers watched Thor and all they could take away from it was a misguided idea to give Darcy, the most unnecessary and pointless character in the history of fiction, a significant bump in screen time.  I hate the character.  I hate the way she talks. I hate the way she is the character to progress all the earth based plot points.  I hate that all her jokes fall flat.  I have no issue with Kat Dennings as I do not know the actress from anything other than the Thor movies but I absolutely hate everything about Darcy Lewis.  The only character more pointless than Darcy is her intern Ian, whose sole purpose is to give Darcy even more opportunities for witless quips.  I don’t understand the reasons behind this.  I cannot imagine, and refuse to even countenance a scenario in which people walked out of Thor thinking that the only way the franchise could get even better would be if there was at least 83% more Darcy.

The increase in Darcy’s misplaced importance to the script didn’t do Jane Foster any favours.  Natalie Portman could have given so much more if Jane didn’t spend the entire film sporadically fainting and gasping into the distance.  Thor could have filled his favourite mead flagon with the aether and glanced at it occasionally to remind us that he had affection towards it and Jane would not have been missed at all.  The relationship between Thor and Jane is so uninteresting the passing mention of a mutual dumping in Ragnarok is more than it deserved.

As with all Thor films the scenes on earth are the weakest and, unfortunately, the most time consuming.  Thankfully the scenes on Asgard are what saves Thor from becoming a minor character in the Darcy ‘pause for the laugh track’ Lewis show.  The opening scene between Odin (Anthony Hopkins) and Loki (Tom Hiddleston) tricks the audience into thinking we are in for some strong Odin family drama but alas this is short lived.  The scenes in which any actor acts with Anthony Hopkins are the strongest but there are not enough of them.  The middle act with Thor and Loki’s escape from Asgard is the emotional heart of The Dark World and does justice to their characters.  Sadly, the tone shifts again and the big action based climax becomes a Scooby Doo like chase through the nine realms.  It’s awful.

Chris Hemsworth gives everything he has to the role but he struggles to be noticed amongst the earth based shenanigans and characters.  There is a reason the Thor franchise comes to life in Ragnarok.

Christopher Eccleston plays the main villain but he is unable to bring any menace or meat to the role.  Like, Natalie Portman, he gets completely shafted in favour of Darcy and Ian’s big adventure.  Odin is still a dick though, the script got that much correct and I am thankful for it.  The fucked-up family dynamic is the strongest part of the Thor franchise.

Thor: The Dark World had potential.  It cemented the perfect casting of the actors playing Asgardians but it squandered everything else.  The Dark World gets 5/10, only because the middle act saved it.  Without the strength of the Asgardian characters I do believe The Dark World would have killed the Thor franchise, and deservedly so.